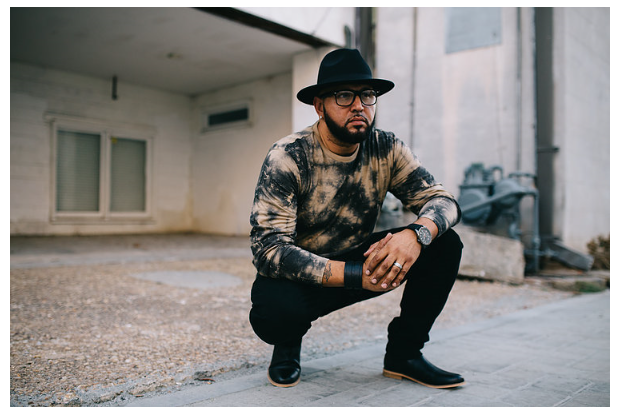 After 20 years of servitude in those hallowed halls lending his vocal, songwriting, arranging and production talents to numerous hit records to some of the biggest stars in contemporary music, the time came for G. LaBeaud to seek his own stage.
From his very first public performance, the young vocalist G. LaBeaud did not disappoint, wowing his Kindergarten graduation class with a gorgeous rendition of “Goodbye Kindergarten”.
At the age of 10, the young singer and his Creole family moved from the New Orleans 7th Ward to Indianapolis, Indiana, where G. and his gifted brothers Jim and Carey, began sweeping the top prize at every talent show in the region. The LaBeaud’s won so often that by high school they were banned from music competitions throughout the Midwest!
This Midwest buzz caught the attention of talent mogul Randy Jackson of American Idol, who gave G. his first taste of Los Angeles and recording studios. After graduation the LaBeaud Brothers moved to Cleveland, Ohio.
In 1995 Gerald Leverts platinum-selling “Groove On” album featured two singles vocally backed by G and Jim LaBeaud. The album also featured the song “Same Place Same Time” written and composed by G and Jim.
The LaBeaud’s backed single “Answering Service” climbed to #12 on Billboards Hot R&B/Hip-Hop Singles Chart in 1995.
In early 1995 the LaBeaud brothers were lured back to Los Angeles. Their resulting five-year tenure in Hollywood nurtured enduring relationships with Urban/Pop superstars like Diane Warren, Buster & Shavoni, Sepp (of Tricky & Sepp) Norman Whitfield, and Marc Nelson just to name a few.
As a credit to his pop sensibilities and versatility, G. was selected to sing backup on “Colour Everywhere” by Country Music star Deana Carter for Sony’s
“Touched By An Angel” soundtrack which also went Platinum.
After a short stopover at Dreamworks Records in 1999, G. and Jim signed a music publishing deal with Jackie Jackson (Of The Jackson 5) family company Futurist Venture Publishing.
Meanwhile working with Diane Warren and singing demos for her compositions that were pitched to and eventually performed by top artists such as Mary J. Blige, Boys II Men, Uncle Sam, 112, Next, Kenny Latimore and Plus One.
In 2001 G. LaBeaud featured on Everett Harps “For The Love” and “I Cant Take It Anymore” which was named Ebony Magazines standout tracks Written and Co-Produced By LaBeaud Music. “For The Love” reached #10 on Billboards Top Contemporary Jazz Albums Chart.
In 2011 he bacame one of the newest members of the group “The Rude Boys” which had two number 1 singles in the 90’s. “Written all over your face” and “Are you Lonely” still brings the crowd to their feet everytime they perform it.
After years of lending his vocal, songwriting, and production skills to the biggest stars of contemporary music, G. LaBeaud finally steps onto center stage himself.
LaBeaud Music is proud to present to the world G. LaBeaud.