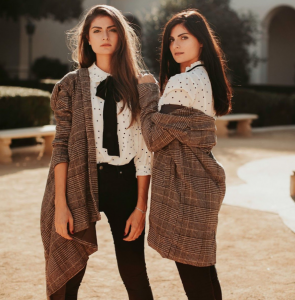 Born two minutes apart twenty-three years ago, Lorène & Marine grew up in ​Bourgoin-Jallieu (​map​)​, a small town in France. Surrounded by music since their very young age, and despite two very different personalities, the twin sisters always shared the same passion for singing and writing; music creation providing with both a way to face their demons and a strong grip onto their dreams. When they turned 21, it was time for Lorène & Marine to fly away from the family nest and move to Los Angeles, reaching out to fulfil their dream of starting a new life with music at its core. Lorène & Marine enlisted at UCLA Extension to study Music Production and Music Business, graduating in June 2018 (​picture​). Soon after, the twins started releasing their first songs under the duo name ​L Y S​*. From their first music video LIPSTICK to performing on local trendy scenes such as The Mint and NoHo’s Republic of Pie, Lorène & Marine are making their mark with their pop, sweet, dynamic songs contrasted with ​sororal​ mystery.